Mr Iweh holds BEng and MEng degrees in Electrical Power Systems Engineering from the University of Energy and Natural Resources, Ghana, and is currently a Graduate Teaching Assistant at the faculty of engineering of the same university. He is a PhD candidate at University of Energy and Natural Resources (Ghana), whose thesis is titled “Design and Implementation of a Hybrid Solar – Mini Hydro Renewable Energy System for Rural Electrification” and was honored with the third prize in the African Union “My Thesis in 180 Seconds” Competition at the just-ended 33rd Conference of Heads of State and Governments of African Union (AU2019) held in Niamey, Niger from July 3 – 7, 2019.

His research interest is (Hybrid Renewable Energy Systems, Control of Hydroelectric Stations, Minimization of losses in High and Medium Voltage Networks, Multivariate Control of Power Systems and Real-Time Computer Control of Geographically Distributed Systems) and his current project is the design of a solar-wind hybrid system for a rural community in Cameroon. In addition, he also serves as a lead renewable energy consultant for PacificTech Engineering Ltd and is a member of the African Network for Solar Energy (ANSOLE) where he has co-presented a research paper on hybrid renewable energy system for rural electrification in a conference on sustainable energetics for Africa held in Yaounde, Cameroon in August 2017. He wants to engage more with influential decision-makers and thought leaders in international energy policy. He’s open to challenges, conversations, and exchange of ideas with top players in the energy industry. His long term goal is to be a regional-level energy consultant and wants to use his untiring commitment to champion the move to clean and affordable energy for citizens of sub-Saharan Africa in the near future. After his graduate studies, he will start working towards this cause. 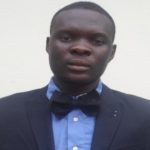